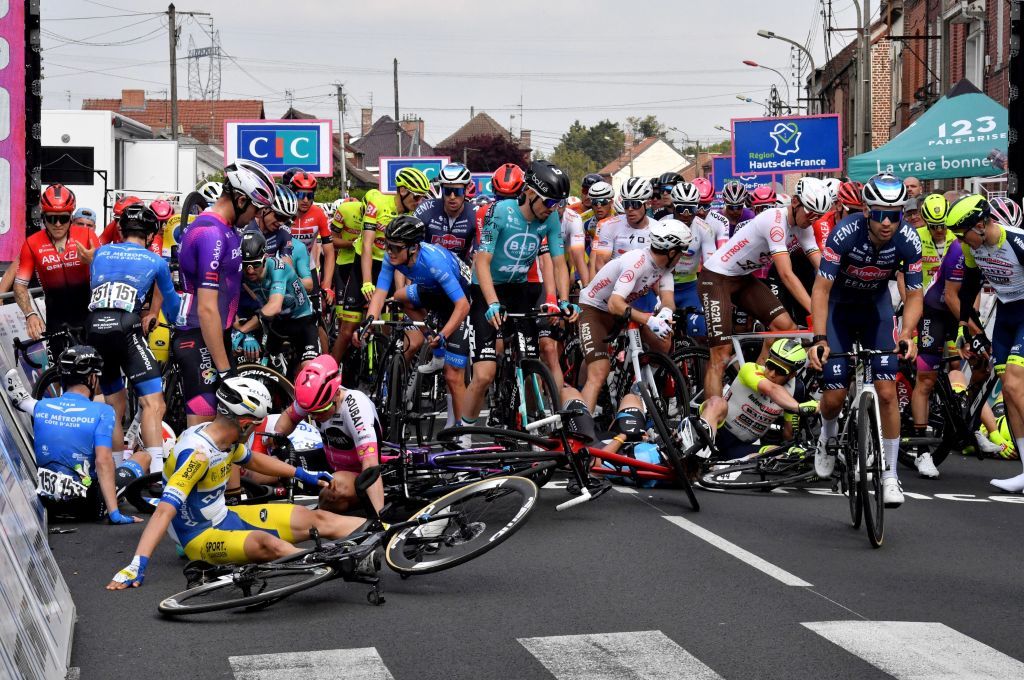 Team DSM sprinter Sam Welsford was relegated to last place in the peloton on stage 1 of the 4 Days of Dunkirk after deviating from his line and nudging Lotto Soudal’s Arnaud De Lie into Dan McLay (Arkéa-Samsic), causing both riders to fall, sparking a massive chain-reaction crash behind them.

Welsford, 26, the winner of a stage in the Tour of Turkey and third in Scheldeprijs, was closing in on McLay when De Lie started to move up in between them. The race jury ruled that Welsford, who appeared to put his elbow out to stop De Lie before moving over to close the door, had deviated from his line.

Human Powered Health’s sprinter Arvid De Kleijn was declared the stage winner and new race leader, while De Lie was classified in sixth place after skidding across the finish line.

It is uncertain whether the 20-year-old will continue the race. After being taken to hospital for examinations he likely suffered a concussion, according to his Lotto Soudal team.

“Initial examinations at the hospital luckily revealed no fractures following the crash,” the team announced on Tuesday. “However, Arnaud most likely suffers from a concussion. A full medical update will follow once all check-ups have been carried out.”

Team DSM sports director Roy Curvers said he hoped everyone was OK. “You can argue for a long time about the fall, but in the end it is the jury that makes the decision,” Curvers said according to Wielerflits.nl. “Looking purely at how we performed, I saw a strong team taking control of the race. The lead-out was certainly good, the victories will follow if we continue like this.”

See more
SOURCE: CyclingNews   (go to source)
AUTHOR: Laura Weislo
All copyrights for this article, including images, are reserved to the original source and/or creator(s).