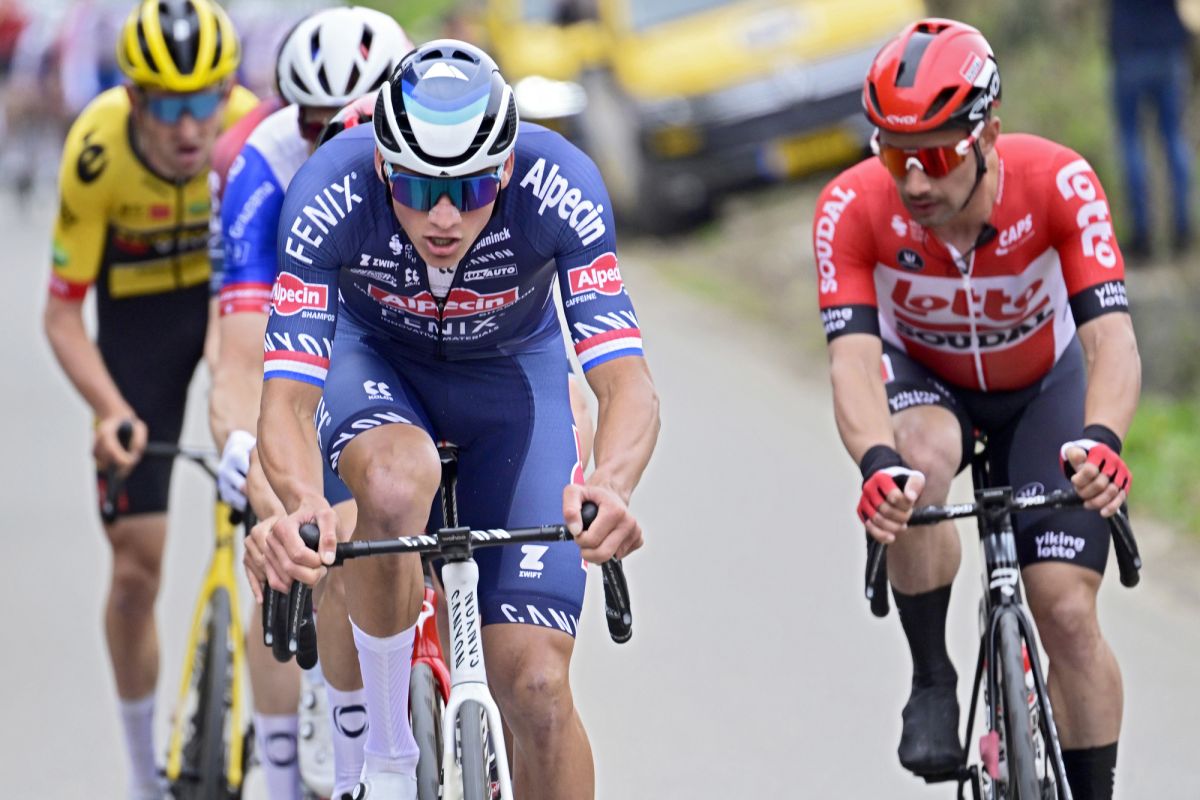 The headline in Friday morning’s edition of Het Nieuwsblad barely needed translating. ‘Vlaanderen bidt voor mirakel,’ read the caption above a photograph of Wout van Aert and a story about the illness that was threatening his participation in Belgian cycling’s grandest occasion: “Flanders prays for a miracle.”

The ‘mirakel’ never materialised. Late on Friday evening, Wout van Aert took to Instagram to confirm that he had tested positive for COVID-19. The outstanding performer on the cobbles this Spring and the overwhelming favourite for the Tour of Flanders was out of the race altogether.

Even before Van Aert’s absence was confirmed, his fan club’s deflation was palpable. They were due to be stationed on the Oude Kwaremont on Sunday, but now they aren’t so sure.

With or without the Van Aert diehards, the Oude Kwaremont will still be in the same place on Sunday, but the tectonics of the Ronde have shifted considerably now that the winner of Omloop Het Nieuwsblad and the E3 Saxo Bank Classic is not on the start line.

Now, minus Van Aert, the mantle of five-star favourite for the Ronde passes to his inextricable rival, Mathieu van der Poel. And, at least in theory, the responsibility for controlling the race shifts from Jumbo-Visma to Van der Poel’s Alpecin-Fenix guard.

Unlike Jumbo-Visma, who were able to deploy potential winners Tiesj Benoot (second at Dwars door Vlaanderen) and Christophe Laporte (second in Harelbeke and Gent-Wevelgem) as foils to Van Aert, Alpecin-Fenix’s chances rest squarely on the shoulders of Van der Poel.

“It might be that we have to carry the race more, but that doesn’t cause fear. We think we will start with seven good riders,” Alpecin-Fenix manager Philip Roodhooft told Sporza. “If he is not there, it will certainly have an impact on the race. But it doesn’t affect the way Mathieu looks at the Ronde.”

Oliver Naesen (AG2R Citroën) sees things from another angle. The Belgian was downbeat about his prospects after suffering from illness in March and then crashing at Dwars door Vlaanderen, but now, for better or for worse, he reckons the dynamic of this Ronde to be very different now that the strongest rider in the race is no longer backed by the strongest team. Riders like Tom Pidcock (Ineos) and Stefan Küng (Groupama-FDJ), already contenders, might set out with even greater belief.

“Who is going to lead the way? How is the response to the break? Who are the favourites besides Mathieu? Nobody knows,” Naesen said. “It will be the Wild West on Sunday.”

That sense of lawlessness is exacerbated by the fact that the usual sheriff in these parts has longstanding issues of his own. Patrick Lefevere conceded on Thursday that his QuickStep-AlphaVinyl squad, winners of eight editions in twenty years, could not race with their usual aggression due to their depleted roster.

Yves Lampaert and Zdenek Stybar have been laid low by illness in recent weeks and the team has not added to its cobbled Classics unit in the transfer market for some time, preferring to devote resources to supporting Remco Evenepoel. Only defending champion Kasper Asgreen, a fine third at Strade Bianche, offers guarantees, but the self-styled Wolfpack seem unlikely to be the collective force of years past.

A year ago, Asgreen benefitted not only from the support of world champion Julian Alaphilippe – an absentee and on a different spring programme this time around – but also from being the third man as Van Aert and Van der Poel occupied themselves with the latest instalment of their infinite duel.

“We saw in the last few years, when they were competing together, it was sometimes good for us,” Lefevere said.

Like Germany at a soccer World Cup or Roger Federer at Wimbledon, QuickStep can never be written off in a race in these parts. They might yet produce another winner on Sunday, but to do so, they will almost certainly have to race differently.

“You have to be intelligent enough to know when you can take the race in your hands or not,” Lefevere said.

This year marks the tenth anniversary of the controversial reworking of the Tour of Flanders route, which saw the finale shift from Ninove to Oudenaarde. In the opening editions of that new era, the sheer difficulty of the new configuration seemed to lead to more conservative racing, with the pivotal moves usually coming on the final haul over the Oude Kwaremont and Paterberg, but the tactical approach has gradually shifted since.

The watershed, in hindsight, came in Tom Boonen’s final Ronde in 2017, when he helped to tee up Philippe Gilbert’s remarkable, 55km solo victory. Since then, QuickStep have typically looked to get riders up the road early and often, while the emerging generation, led by Van Aert and Van der Poel, have been far more inclined to open the race from distance than those who came before them.

“In the past, the favourites used to race more defensively,” his teammate Tiesj Benoot said. “Even without Wout, it will still be a long final.”

The roles of Benoot and Laporte, of course, will be very different. Where previously they looked to play Terpstra and Chavanel to Van Aert’s Boonen, now they are the riders charged with leading the line for Jumbo-Visma.

While they both insisted the team would race differently without Van Aert, Matteo Trentin (UAE Team Emirates) suggested the road to victory still ran through the men in yellow and black, so dominant on the cobbles so far in 2022.

“I’d say Jumbo are still the favourites, they’ve certainly shown they are the strongest team,” said Trentin. “I don’t think the presence or absence of Van Aert changes things.”

The presence of Tadej Pogačar, on the other hand, certainly could. The Slovenian already sampled the cobbles at Dwars door Vlaanderen on Wednesday, where a momentary lapse at Berg ten Houte saw him miss the decisive break. His absence from that move helped to focus minds in front, as Van der Poel, Pidcock, Küng and Benoot struck up a notable working alliance to fend off Pogačar’s pursuit. His strength makes him a most dangerous debutant, particularly over the Monument distance.

The Tour of Flanders has lost its outstanding favourite, but the permutations remain endless. Same as it ever was. By Sunday afternoon, the Van Aert fan club will probably have come around to the idea of watching the race too.