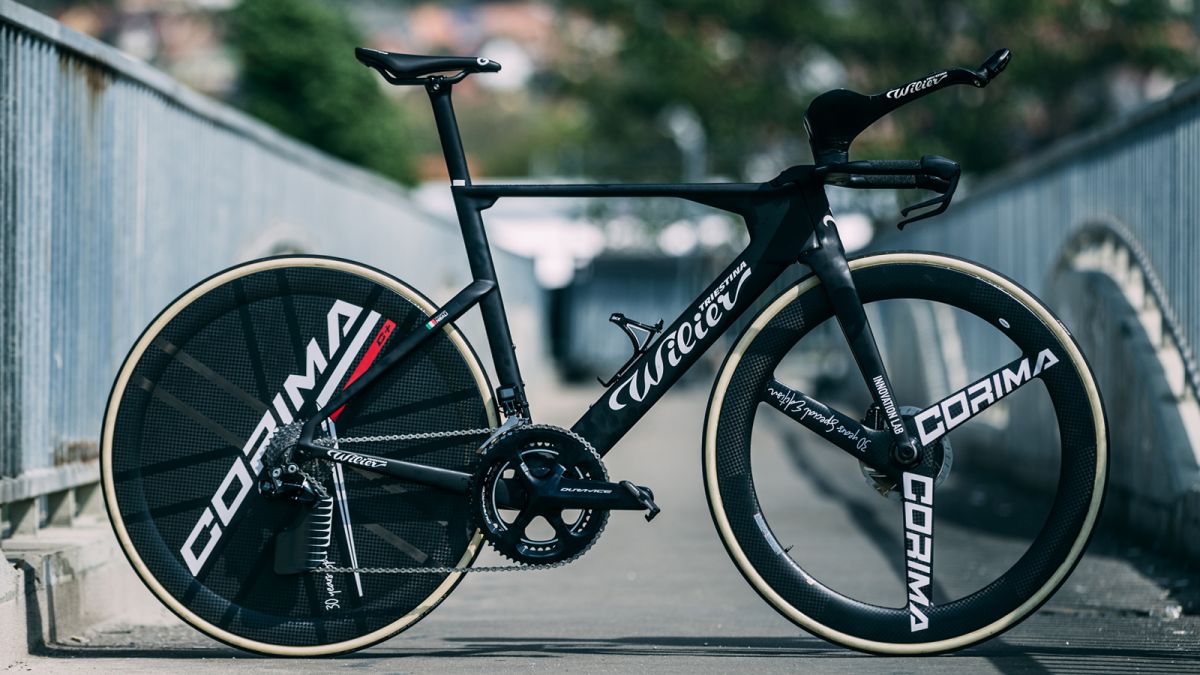 Just in time for the Giro d’Italia, in which stage 2 comprises a 9.2km individual time trial, Wilier has launched the Turbine SLR, a prototype time trial bike that Cycling News understands will be raced by Vincenzo Nibali and his Astana Qazaqstan teammates this weekend.

In comparison to the aforementioned BMC and Colnago, the Wilier is somewhat understated and reserved in its design, but a lot has changed from the brand’s previous Turbine time trial bike.

The seat tube is perhaps the most changed aspect, which is considerably more svelte in appearance. It previously hugged the rear tyre with millimetres spare, but now, it is not significantly deeper than the brand’s lightweight road race bike, the Zero SLR. At the top of this seat tube, another similarity to the Zero SLR is found in the form of added square of material housing the seatpost clamp.

The Turbine’s fork retains the bayonet-style attachment, which positions the steerer tube on the outside of the frame. This is shaped to flow with the frame’s head tube to create a deeper profile and circumvent the UCI’s rules around maximum tube dimensions. This is a tactic also employed by Cervelo on the S5 road bike, as well as the aforementioned Colnago TT1.

One novel inclusion that caught our eye was the cover added to the rear derailleur. This appears to be an aerodynamic fairing to help smooth the air around the derailleur cage. Wilier makes no mention of the component in its release, and all of the other images provided show either a standard Dura-Ace derailleur cage or an aftermarket CeramicSpeed OSPW. It’s unconfirmed whether the component will be used by Astana Qazaqstan during the Giro d’Italia, but there are undoubtedly going to be questions about its UCI legality.

Nonetheless, it’s an interesting inclusion, and one that will interest time triallists racing outside of UCI sanctioned events, and are therefore able to push the pursuit of watt savings even further.

Wilier says the new bike was developed together with technicians and athletes from the Astana Qazaqstan team, and that the bike is faster “on roads with slopes and continuous changes of direction”. This, according to the brand, is thanks to a reduction in frame weight of 300 grams.

Other amendments include concessions to the latest crop of groupsets. With Dura-Ace and SRAM both being wireless between the shifters and the derailleurs (and rumours surrounding Campagnolo following suit), the down tube of the new Turbine SLR has omitted the holes that allow cable entry and junction boxes. Despite this, the bike can still accept wired groupsets, and is seen here fitted with the 11-speed Dura-Ace R9170 groupset. The bike also appears to be compatible with disc brakes only.

Complementing the bike is a new set of custom-moulded time trial extensions, also from Wilier. These are made specifically for the team’s riders not unlike aftermarket systems from Speedbar or Aerocoach.

The bike is currently touted as a prototype, and as such, no information has been provided surrounding price or availability.