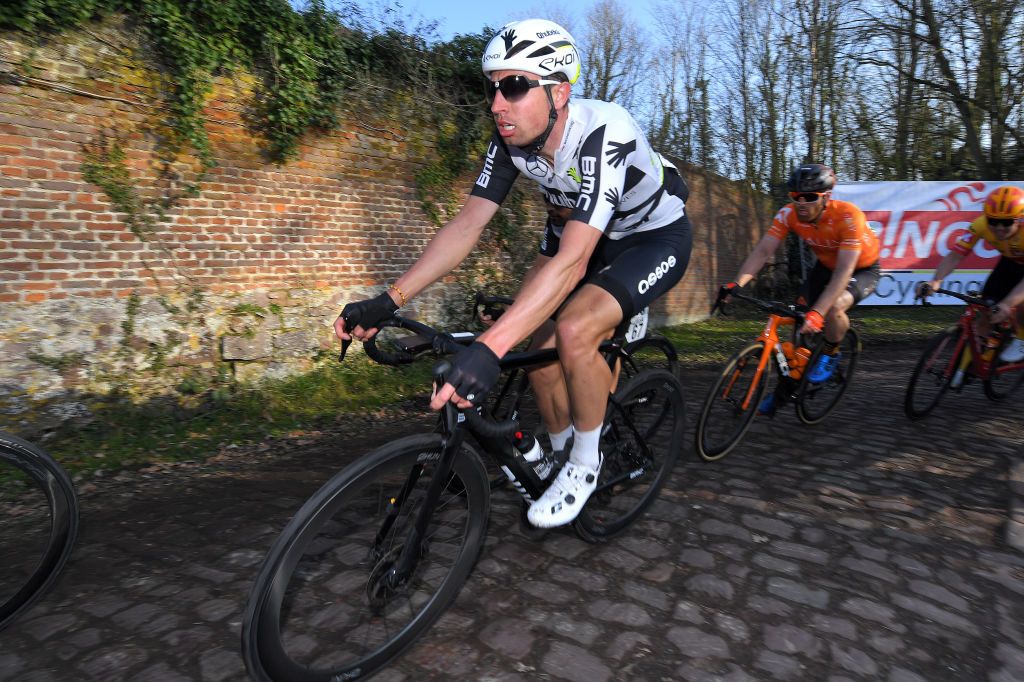 EF Education-Nippo announced it has signed Łukasz Wiśniowski to bolster its line up for the Spring Classics next season. The versatile Polish rider changes WorldTour teams after a single season at Qhubeka NextHash.

The African team has been suffering financial problems and told its riders to seek other teams as it fights for its survival with a last-minute effort to find a sponsor. The team missed the initial deadline for a 2022 WorldTour licence and has already lost Victor Campenaerts to Lotto Soudal and Giacomo Nizzolo to Israel Start-Up Nation.

This past season Wisniowski completed the fourth Grand Tour of his career, had his best career finish at Tirreno-Adriatico, 13th, and took the bronze medal at the Polish ITT national championships. His calendar has included a heavy dose of cobbled Classics in his seven years on the WorldTour level, with his best finish second place at Omloop Het Nieuwsblad in 2018 racing for Team Sky.

James Shaw steps back to the WorldTour with EF Education-Nippo

Bissegger set for another year at EF Education-Nippo

“The cobbles suit me,” Wiśniowski said in a team introduction from EF Education-Nippo. “One day races when you just race full gas from the start to the finish line. The parcours really suit me: the cobblestones, the small roads, the wind. All that is what I really like. I’m not a climber so I really enjoy the races in Belgium.

“When I was a kid, I always watched Omloop, Paris-Roubaix, and the Tour of Flanders. It was those three races I was dreaming about. The biggest goal is to win Paris-Roubaix. You always have to look at the highest goal and focus on it. That would be my dream from childhood.”

Just two months shy of his 30th birthday, Wiśniowski has raced competitively for 14 seasons. He won a pair of stage races as a junior, the UCI 2.1 Tour de la Région de Lodz in 2008 in Poland and the Course de la Paix Juniors in 2009. It was at the five-day stage race in the Czech Republic that his GC honours came ahead of Nikias Arndt (now with Team DSM) and Wilco Kelderman (now with Bora-Hansgrohe).

Once on the pro level in 2013 with a Continental Etixx squad, Wiśniowski won both U23 Polish national titles in the road race and time trial. He would follow that the next year with a stage win at the Tour de Normandie and GC victory at Circuit des Ardennes International.

EF Education-Nippo will be his fourth WorldTour team since he first moved up in 2015 with Etixx-QuickStep.

“I’ve often changed teams in the past and I like this because then I get new friends and also new goals for the new season. New goals are new motivation,” he said.

“I would like to help the team because there are a lot of GC riders and sprinters and climbers so that’s a goal for me. Personal goals, I would like to be focused on the spring Classics and to show myself at one of those races. The team always races aggressively which is what I really like. That’s why it’s my dream team.”

“Łukasz sort of balances out the influx of young talent into the team in 2022.  We needed a couple of hard core, stalwart guys that know the job, that know how to get the work done in the Classics,” said Jonathan Vaughters, team CEO.

“Łukasz has actually produced some great results on his own in the Classics as well. He’s the foundation of the team, the guy you’re bringing in to steady the ship. An experienced rider, he’s been around, knows the races, knows how to work for a leader, knows how to race for himself. The foundation of a team is having guys like him who can get the grunt work done.”

Vaughters also said he appreciates the Pole’s relaxed nature and positive attitude, which is good in a team atmosphere with younger riders.

“A lot of the young guys can be super nervous and wound up, whereas the older guys sometimes, they’re the ones who bring a little levity to the situation, a little bit of a lighthearted nature. He’s a great person to have at the dinner table. I don’t usually say that as an attribute as to why I put a guy on contract, but the social dynamic is important.”