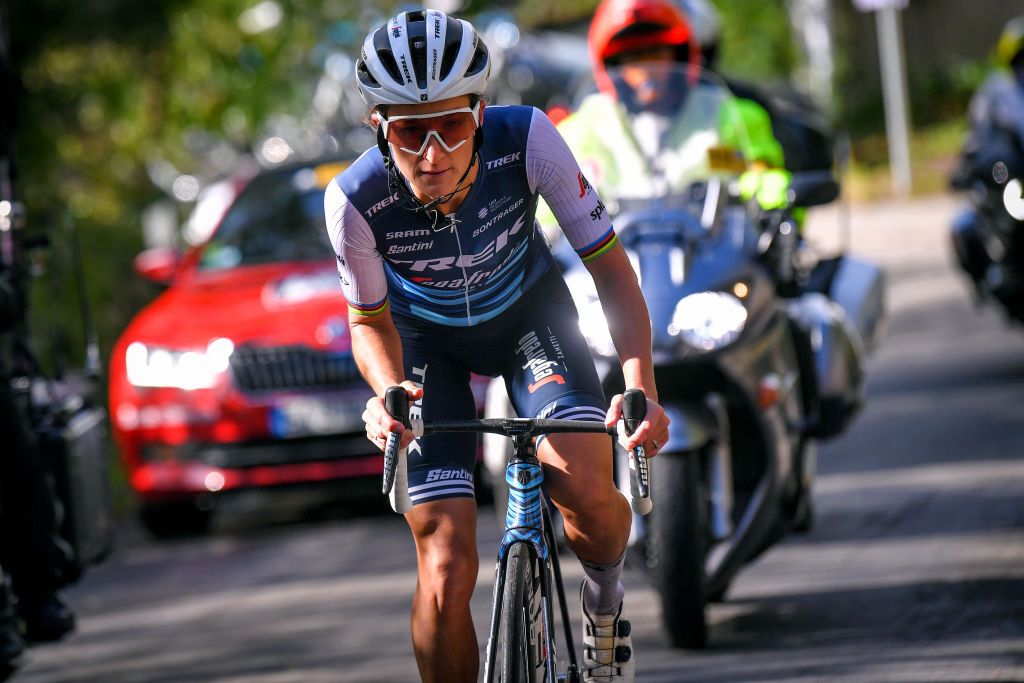 Trek-Segafredo, SD Worx and Canyon-SRAM have come together to launch a new film series called The Run Up that highlights the days leading up to major events on the Women’s WorldTour. The first episode will be released on April 24, the day before Liège-Bastogne-Liège.

“As a sports fan myself I am always inspired and excited to see the character behind the athlete,” said Lizzie Deignan (Trek-Segafredo) the defending champion of Liège-Bastogne-Liège.

“I think it’s a really interesting idea to allow women’s cycling fans behind the scenes to get to know the characters within our sport. There are so many diverse and interesting women in the peloton so I am sure it will be a really intriguing series to watch!”

The Run Up will be a semi-regular web series, free to watch on YouTube, that takes cycling fans inside the best cycling teams in the world immediately before major race days on the Women’s WorldTour.

The first episode will highlight the lead-up to Liège-Bastogne-Liège, the final of the Ardennes Classics held on April 25. The rest of the series aims to showcase the lead up to three more events this season including the first edition of the women’s Paris-Rouabix that will now take place on October 2.

The Run Up will be narrated by journalist and commentator José Been, who will take viewers into the days before the race.

“I started following women’s cycling about ten years ago,” said Been. “Back then we hardly had any TV coverage or media coverage. I knew only the most important players. It was hard to really immerse yourself in the sport.

“My philosophy has always been that if cycling fans get the opportunity to get to know the riders of the women’s peloton better you can’t help but fall in love with the sport. In everything I do my goal has been to showcase the amazing characters of the women’s peloton. The Run Up does just that. I am so excited to be part of this and tell the stories from within the sport.”

SD Worx, Canyon-SRAM and Trek-Segafredo will feature in the first episode ahead of Liège-Bastogne-Liège, but there are plans to add more teams in future episodes. All three teams will open their doors and provide behind-the-scenes access to riders, and work together to highlight Liège-Bastogne-Liège.

“I’m really excited about this initiative which gives fans a glimpse into our preparations for an important race,” said Ashleigh Moolman (SD Worx).

“This intimate and special occasion gives them insight into who we are and what we do. I think this is important because it allows fans to build a connection with us not only as racers but also as people.”

Tiffany Cromwell (Canyon-SRAM) believes The Run Up will bring fans closer to the their favourite teams and riders as they prepare for major targets during the season.

“It’s an opportunity for the world to gain a greater insight into what goes on behind the scenes at the highest level, to prepare for the world’s biggest and toughest races and the rollercoaster of emotions that comes with it,” Cromwell said.

“It’s an exciting new project that I’m confident will help widen the audience of women’s cycling and hopefully bring more people into the sport and inspire people along the way.”

Liège-Bastogne-Liège Femmes is the youngest of the Ardennes Classics women’s races, introduced in 2017 to form the third event of the historical cycling series. Only one rider has won all three events in one season – Anna van der Breggen (SD Worx) – during the inaugural year 2017.

Since that feat, Van der Breggen has gone on to win Liège-Bastogne-Liège Femmes in 2018, too, while Annemiek van Vleuten (Movistar) won it in 2019 and Deignan won the race in 2020.

Join Cycling News for live coverage of 2021 Ardennes Classics – Amstel Gold Race Ladies Edition on April 18, La Flèche Wallonne on April 21 and Liège-Bastogne-Liège on April 25 – and check in after the races for our full report, results, gallery, news and features.