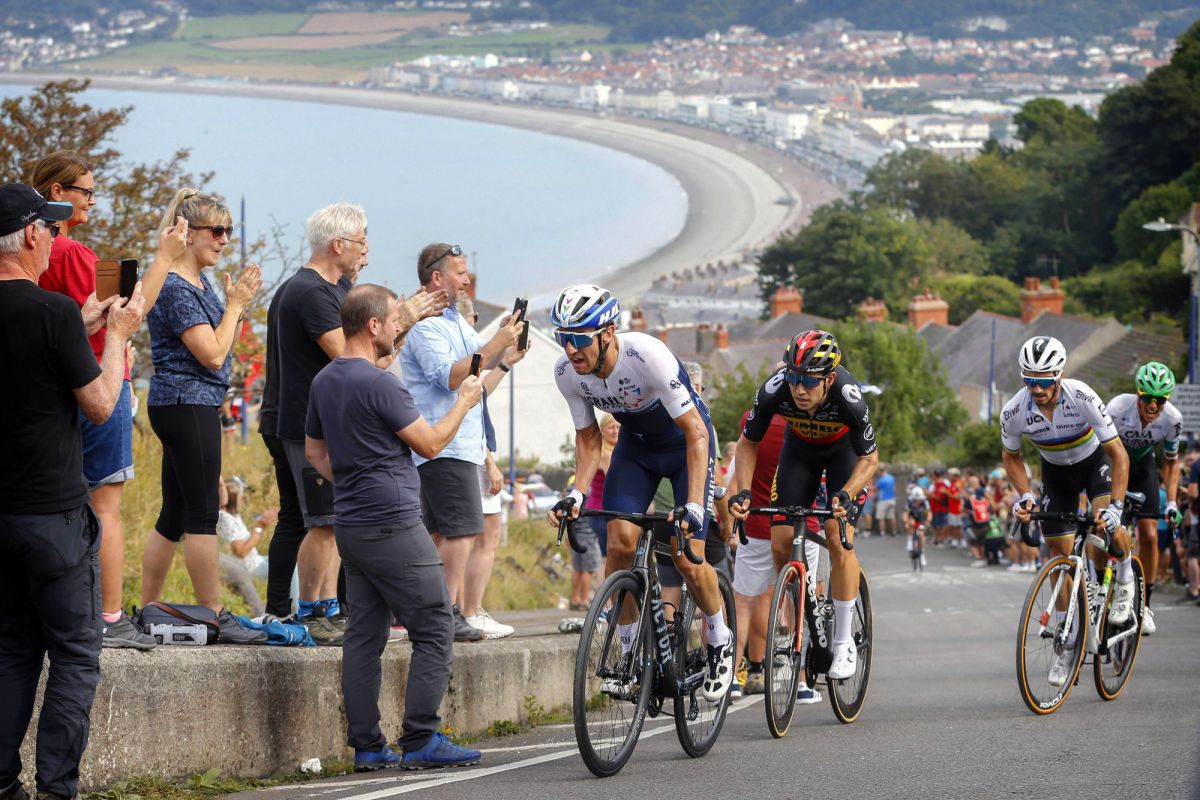 Michael Woods (Israel Start-Up Nation) had the best seat in the house on stage 4 of the Tour of Britain when it came to seeing the pre-Worlds form of two of the leading favourites in Wout van Aert (Jumbo-Visma) and Julian Alaphilippe (Deceuninck-QuickStep).

It was Woods who instigated the stage-winning move at the foot of the final climb on the Great Orme, and who dragged both Alaphilippe and Van Aert with him as the gradient rose into the double digits.

Despite having to settle for third, with Van Aert nudging out Alaphilippe in the dash to the line, Woods was satisfied with his overall performance.

“That was super hard and a super demanding climb,” he told Cycling News at the finish.

“I tried to get the separation on the first pitches but Wout and Julian were too strong. We wanted to get as much separation as possible and see what I could do. I wanted to race by feel today and it just felt right at that moment to try and go for it. That was the time to go.”

Woods’ climbing prowess on the final stage in Wales before the Tour of Britain returns to England was enough to nudge him into fifth overall and he sits 40 seconds off Van Aert’s slender race lead. Stage 5 is expected to end in a bunch sprint but the following two days are likely to be stages for the overall classification and Woods will have the chance to compete for a podium place.

The 34-year-old told Cycling News that he would skip the UCI Road World Championships in Belgium later this month but that 2021 had been his best season to date. The Canadian has arguably been one of his team’s best performers all year with two wins and several high profile and consistent outings in both one-day races and stage races.

He took a stage win at the Tour des Alpes Maritimes et du Var back in February and took top-five finishes in both La Flèche Wallonne and Liège-Bastogne-Liège. Another stage win followed at the Tour de Romandie, along with fifth overall, and then he also took fifth on the final general classification at the Tour de Suisse. The Canadian also picked up the king of the mountains jersey in Switzerland, placed third on stage 5 and narrowly missed out on a stage win, taking second on the final day, before heading to the Tour de France.

Woods was given a late chance to ride for GC in France but had greater success in chasing stage wins, with a third place finish at Le Grand Bornand and fifth at Quillan before ending his race ahead of stage 19. At the Olympics he was one of the main protagonists and helped shape the race but missed out on a medal, finishing fifth.

“The legs have been feeling good and I want to win here but third against those two is still okay. I think I’ll be sitting fifth now and I’m happy with that. This year I’ve been super consistent in the races that I’ve done and I’m really happy with that. It’s been the best season of my career so far and hopefully I’ll be able to carry that on in the Italian Classics,” he said.

“I won’t be at Worlds, though. I just want to stay safe. It’s been a long season with a lot of stress, a lot of positive stress, and I just want to go into the off-season and chill. My performance at the Olympics was a big highlight for me. It was upsetting to not get a medal but I had good legs and really showed that I was one of the top guys there. I was proud of that race.”

According to Woods, the form of Alaphilippe and Van Aert on the tough uphill finish in Wales on stage 4 was a clear indication that the pair would be the riders to watch on September 26 when the men’s road race is decided at the World Championships.

“From what I’ve seen today Julian and Wout are on the top of their game for the World Championships. They’re going to be the guys to beat for sure,” he added.