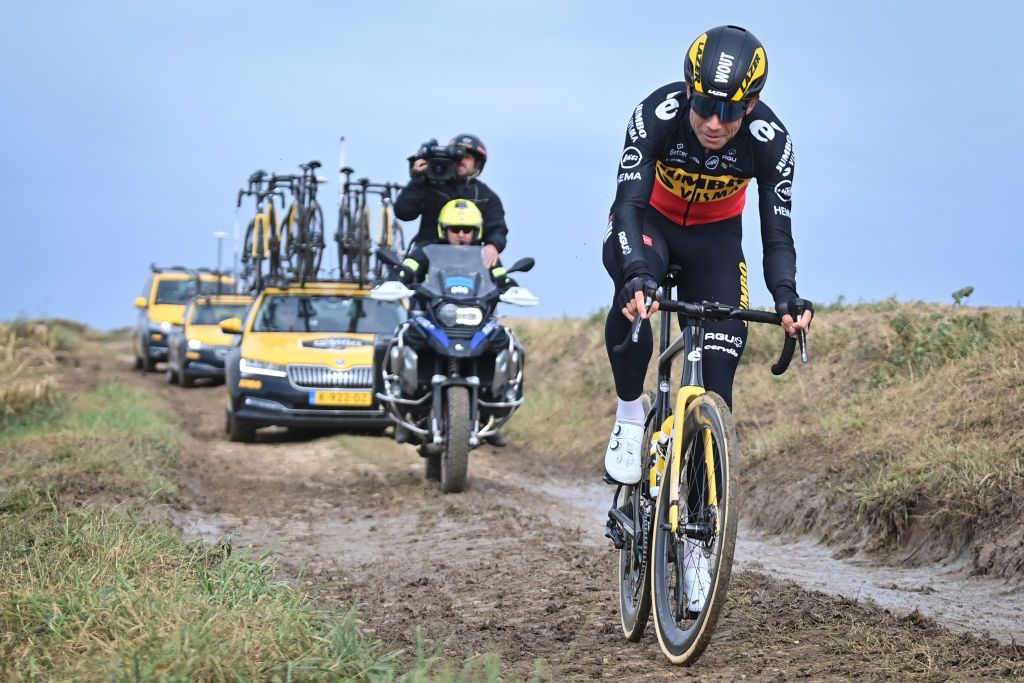 Belgian superstar Wout van Aert (Jumbo-Visma) has confirmed that he will be applying a different strategy to the upcoming Classics season but insisted that his squad is also taking a new, much more thorough approach to these races, too.

Regardless of where they finally appeared in the pandemic-affected calendar in 2020 and 2021, over the past two years Van Aert has sometimes won and nearly always shone in races as varied as Strade Bianche, Milan-San Remo, Amstel Gold, Paris-Roubaix and Gent-Wevelgem.

Yet for all his personal success, the Belgian told media during the Jumbo-Visma press day on Tuesday he will be making some big shifts in his spring Classics strategy this year.

It was already well-known that he would not do the UCI Cyclo-cross World Championships in the USA, but Van Aert added on Tuesday he would also skip Strade Bianche, which he won in 2020.

“In the past Spring campaigns, I was in good shape early on, but my form declined,” was how Van Aert explained the lightening of his early-season race load. “It took me longer to recover between races.

“So that’s one of the reasons why I’m not doing the Worlds Cyclo-cross or Strade Bianche, and I’ll be switching from Tirreno-Adriatico to Paris-Nice for the first time.”

Van Aert will also race Omloop Het Nieuwsblad (where he took a career-best place of 11th in 2020), “mostly as preparation for later on in the year,” he said. “Nieuwsblad will be my first event of the season so it will be very hard to be in good shape for that one there.”

Even for a Classics star as experienced as Van Aert, the learning process about one-day races remains a continuous one, with the Belgian reflecting publicly on Tuesday about why sprints in the highest-profile one-day races can be extremely hard to predict.

“I’ve seen there is a big difference between the longest Classics and the 200-kilometre events,” explained Van Aert, who himself narrowly outgunned Tom Pidcock (Ineos Grenadiers) for victory in Amstel Gold last year.

“The sprints on those longest races are much less explosive, it’s more a fight just to get through as best you can. That’s why you can get these surprising results, with one guy who is faster on paper expected to win. But in fact, it ends up being the other way around.”

Regardless of what the final results will be this season, Van Aert also explained Jumbo-Visma are currently trying to apply the same kind of detailed approach they have used to great effect in the Tour de France in recent years to their Classics campaign.

“For example, this year we’ve already done the recon for some of the races and we are much more concerned about using different equipment. We’ve already had meetings, too,” he said, “to discuss strategies and different possible outcomes and to improve team spirit.

“Last year it was more a case of ‘this is the program, these guys will ride’ and we first met on the race day. That’s something we’ve wanted to improve on in 2022.”

Looking further down the line, it was suggested to Van Aert that his riding alongside teammate Primož Roglič in Paris-Nice could help them harmonize their strategies for the Tour de France, where Roglič will be fighting for the yellow and Van Aert for green. But while Van Aert defined the suggestion as interesting, he ultimately rejected it.

“I’m not that keen on the points jersey in Paris-Nice, and it would be stupid to chase that just to test our collaboration,” Van Aert said. “But it is true we have to calculate exactly how we tackle things in the Tour very well – we’ll be trying for two goals. In either case, I’ve shown in the past that I can go for my own goals and race for the team leaders at the same time.”

Van Aert also told Belgian media he and Remco Evenepoel (QuickStep-AlphaVinyl) were due to meet to settle any outstanding differences from the World Championships last year.

“We will sort things out over a coffee,” he insisted. After which, rather than any past upsets, Van Aert will surely be fully focussed on his new approach path to the Spring Classics – and beyond.