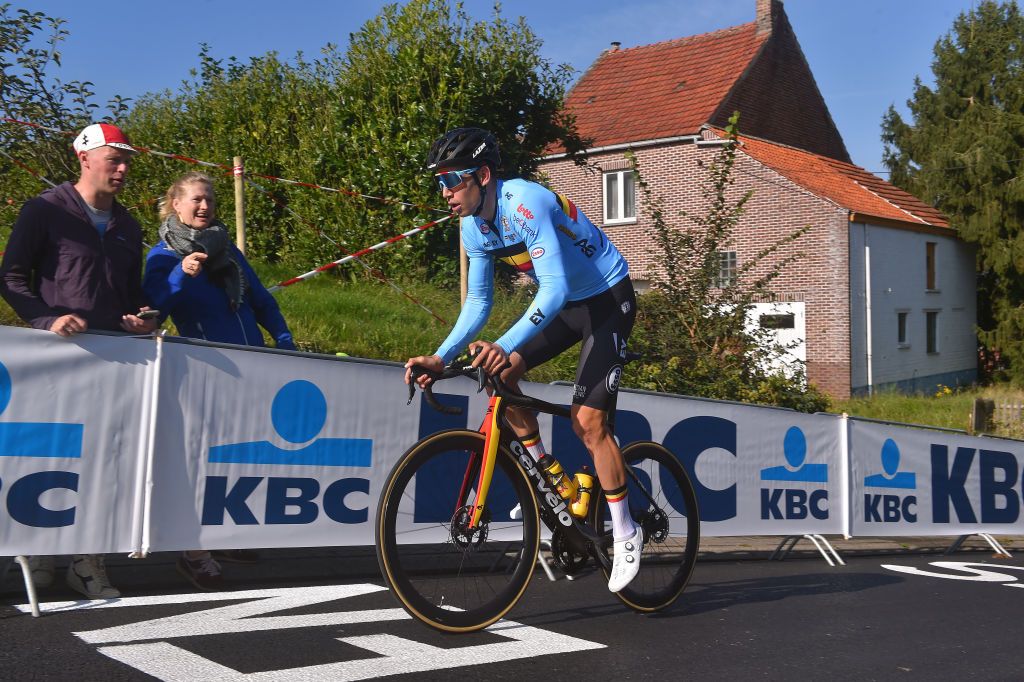 You might think Wout van Aert has a lot on his shoulders. He is the overwhelming favourite to win the elite men’s road race World Championship title on Sunday. He’s the outright leader of the Belgium team at a Belgian Worlds. And he has quite the collection of silver from recent major international competitions, but still no gold.

And yet the 27-year-old appears to be wearing all that lightly.

“Is it an important race? Absolutely. But the race of my life? That’s journalist talk,” he said with a smile during a press conference at the Belgian team’s swanky hotel in Mechelen.

“You could say the same about the Olympic road race, or the final stage of the Tour de France.”

Van Aert’s seven teammates had all faced the press the previous evening, but this special solo slot was reserved for him, giving an indication of his status ahead of Sunday. He carries the hopes of a nation on his shoulders and, with no Belgian gold so far, that pressure is increasing by the hour.

“Already this position is kind of a dream to experience,” Van Aert insisted. “Having a World Championship in our home country and being the guy to watch, that’s a nice feeling. Of course there’s a lot of pressure that comes with that but I try to enjoy it.

“I’ve felt really good the last couple of weeks, so I’m prepared well as possible. There’s some more tension, but for now it just gives me positive feelings. Thinking about amount of spectators on side of the road, I’m actually really looking forward to experiencing it. I hope it will be an extraordinary day.”

Van Aert was reminded that the last Belgian to win the world title on home soil was Benoni Beheyt in 1963. “That’s a really long time,” he acknowledged.

“It’s always too long. There hasn’t been a Belgian world champion at all since Philippe [Gilbert] in 2012, so that’s also long for a country like us. It would be good to have a new world champion.”

Winner of mountain stages, bunch sprints, time trials, and punchy finishes, it would be hard to design a World Championships course that doesn’t suit Wout van Aert, but the Flanders 2021 course seems particularly tailored to his strengths. The 268km route takes in two laps of a ‘Flandrien loop’ in the hills around Overijse, but will mainly come down to the laps of the 15km city-centre circuit in Leuven, with its relentless twists and punches.

The parcours seemingly opens itself up to a wide range of scenarios but the general consensus says the rainbow jersey will come down to a sprint from a reduced group.

“Attack is sometimes the best form of defence, yes, but the ideal scenario for me right now is to go to the final in ‘save mode’,” said Van Aert, using the Flemish term ‘spaarmodus’, which is used to refer to the battery-conserving function on mobile phones.

“I have to dare to trust my sprint. I’m not afraid of anyone. If I race an open race myself, I have a good chance of isolating myself.”

“We all start with the idea that I’m the one who should try to finish the race off. Everyone realises that I have the best chances,” Van Aert said.

“I have faith in the team. They can counter many attacks for me, which could put me in a luxury position. Even if the race explodes from far, we should be able to be there with lots of guys in the final. That must be the goal, to have support for me for as long as possible.

“When you have such a strong team, with basically all leaders in their own teams who want to support you, that’s a really nice position. I’m really confident for Sunday, having support like that.”

As for Evenepoel, Van Art said he had no concerns over commitment after the 21-year-old was accused of “mainly riding for himself” by none other than three-time road race World Champion Eddy Merckx.

“Remco has a whole personality, it’s normal for him to be asked about this, but we get along well,” Van Aert said. “We are both hard workers who feel the same way. I think it’s fantastic to hear how motivated he is to contribute as part of the team. I am absolutely not afraid that we would not be on the same page.”

Before he strolled off down the corridor, Van Aert did give more of an indication that there’s fire in his belly.

“I’m still tired of second place,” he said, referring to his double silver at last year’s worlds, and again in the Olympics road race and indeed the weekend’s Worlds time trial. “I’m really going for gold on Sunday.”