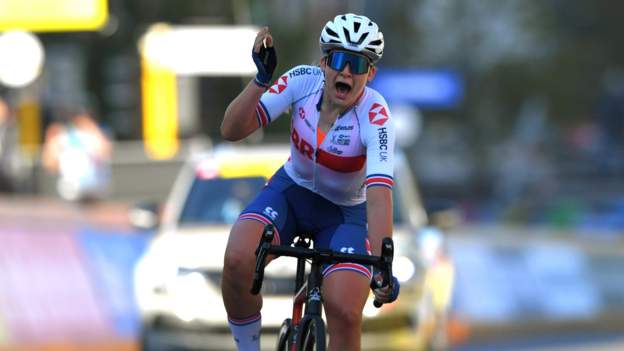 Zoe Backstedt’s achievements in the last five months would barely fit in a tweet.

Then last weekend she made her first big step onto the senior scene, with a maiden victory in a professional race thanks to a dominant ride in the Ethias Cross cyclo-cross event.

With it she became the youngest ever winner of a women’s elite cyclo-cross race in Belgium – a nation with more than its fair share of cycling pedigree.

An impressive list of accomplishments for someone still nine months away from turning 18.

Yet a tweet would be plenty long enough to sum up what she believes has been the secret of her recent success.

“Having fun,” Backstedt says with a smile.

“I just go into every race and I think as long as I have fun and I ride my best and just enjoy racing with some of the best riders out there, I get good results.”

Backstedt carries a famous name around with her.

Her father Magnus won Paris-Roubaix and has taken a stage of the Tour de France. Her mother Megan won the British road race national title and competed for Wales at the Commonwealth Games.

Her older sister Elynor is also a talented professional cyclist with back-to-back medals at the Junior Road World Championships in 2018 and 2019.

“It took me until I was maybe ten or eleven to enjoy it.

“At the time I was doing cycling, netball, tennis and athletics all at once. I’d go out on the bike but I’d say to dad that I don’t want to do any more than two hours. I was adamant.

“Then one day it just clicked and I thought this is what I want to do.”

But it is undoubtedly their parents who have proved the biggest inspiration, albeit with no pressure to follow in their footsteps.

“Mum and Dad never really saw us as growing up to be bike riders,” Backstedt continues.

“They said if they’d known we were going to be cyclists and have this many bikes, they’d have bought a house with a bigger garage!

“But it’s pretty cool. My earliest memories as a kid are watching Dad doing the Tour series, racing round Canary Wharf and places like that. I’d see Dad go past and I’d be like ‘it’s Dad!’ and I’d be shouting for him.

“Then watching my sister grow up and do so well in races and going to support her at the World Championships and now being professional. It’s where I want to be.”

Zoe’s father Magnus is still heavily involved in the sport. He was commentating – understandably emotionally – as she won gold at the Junior Road World Championships but is alongside her in the pits for the cyclo-cross races throughout the winter.

The pair take the family van across Europe to race, while mum Megan joins them when she can and video calls when she cannot.

Many of Backstedt’s wins this season have been utterly dominant.

At the under-23 and junior European Track Championships in August, she broke world records on her way to golds in the individual pursuit and team pursuit. Last weekend, in that elite cyclo-cross race, she beat a field of professional riders by more than a minute.

Cyclo-cross is ‘where I shine’

The fact that she can perform so impressively across three distinct cycling disciplines has also got people talking.

She tells me she has ‘found what she is good at’ in cyclo-cross, even though she is also the current junior world champion on the road.

“There’s something about racing in a wet Belgian field somewhere in about two degrees, in rain, mud, snow, that I absolutely love,” she says.

“I’ve found my discipline, I’ve found what I’m good at and it’s definitely in cyclo-cross. It’s where I shine and it’s where I see myself in the future for sure.”

But Backstedt will continue to race on the mud, road and track into 2022.

She has a long list of titles to defend and some new ones to try to win.

Teams inevitably are already enquiring about her turning professional once she turns 18 next September.

Then there is the Commonwealth Games in Birmingham in July. A major senior event but one Backstedt – or perhaps both Backstedts – certainly has half an eye on.

“It’d be pretty cool if me and El could do it,” she says.

The Paris Olympic Games are then just two years later. Zoe Backstedt is a name to watch out for.

SOURCE: BBC Sport – Cycling RSS   (go to source)
AUTHOR: By Tom Brown
All copyrights for this article, including images, are reserved to the original source and/or creator(s).